Last week, Nintendo was sure to make the start of 2020 super effective with a brand new Pokémon centric Nintendo Direct. Missed out on the video presentation well we have that below for you to watch but if you prefer the elegance of the written art? We’ve got you covered! Below is a summary of everything Nintendo announced during the stream.

Back in 2006, Nintendo released Pokémon Mystery Dungeon Red Rescue Team for GameBoy Advance, and Blue Rescue Team for Nintendo DS. Both games followed the adventure of a human who turned into a Pokémon, crawling through a mysterious, randomly generated dungeon along with various Pokémon pals.

14 years on, Nintendo will be releasing Pokémon Mystery Dungeon Rescue Team DX, a remake of both Red and Blue Rescue Team for the Nintendo Switch family systems. The title will launch on 6th March 2020, with a demo version available to download now. If you decide to try the demo out, you can carry on your save data to the retail version should you decide to purchase it.

Pokémon Sword and Pokémon Shield will be the first ever game in the mainline Pokémon series to receive paid DLC. This will be in the form of an Expansion Pass bundle, something that has become common in recent Nintendo Switch titles such as Luigi’s Mansion 3, Fire Emblem: Three Houses, Xenoblade Chronicles 2.

The Sword and Shield Expansion Passes will come in two parts, the first part, planned to launch before July this year, will be called The Isle of Armour, and the second, planned to launch by the end of November this year, is titled The Crown Tundra. A new area will be introduced in each part, both of which function very similarly to the Wild Area. It is important to note you cannot buy The Isle of Armour or the The Crown Tundra seperately and that the expansion passes are version locked, so the Sword pass will only work with Pokémon Sword and the Shield pass will only work with Pokémon Shield. As well as brand new Pokémon, both The Isle of Armour and The Crown Tundra will re-introduce more than 200 pokémon thought to be retired from the Galarian Pokédex, including brand new Galar variants. Don’t want to pay for old pokémon (and, you know, all that other really cool stuff)? You won’t have to. Following each DLC release, all games will receive free updates allowing non-expansion pass users to obtain expansion pokémon through Link Trades and Pokémon Home.

Speaking of, Pokémon Home is scheduled to launch in February 2020. More details to follow.

The Sword and Shield Expansion Passes are currently available to pre-purchase on the Nintendo Switch eShop for £26.99. Purchasing now will instantly nab you a cute Pikachu and Eevee uniform; which side will you choose?

The Isle of Armour, releasing Summer 2020, introduces a brand new area of the Galar region: a giant island full of beaches, bogs, forests, caves, and dunes…The area also promises to focus on themes of Growth though I wonder if the Isle of Wight served some inspiration for this new area.

Galar’s previous champion, and the mentor to Leon (not myself), Mustard, resides in this beautiful locale and has taken a liking to your battling skills, which is why he wishes to take you on as his apprentice in his Battle Dojo. New rivals will train along with you: for Pokémon Sword players it's the Poison type user, Klara, and for Pokémon Shield players it's the Psychic type user, Avery.

Not only will there be various new pokémon yet to be seen in the Galar region, but there’s also a brand new legendary Pokémon too… meet Kubfu.! Mustard will entrust you with the fighting-type legendary Pokémon during your training, and once your programme has been completed, Kubfu will then evolve into Urshifu, a pokémon with two distinct fighting styles. The Single Strike style is a fighting/dark-type style that deals a… wait for it… ‘single strike’ at lightning speed. The Rapid Strike style however, is a fighting/water-type style that… again, wait for it… deals a torrent of ‘rapid strikes’. It has also been confirmed that Urshifu have a different gigantamax form and G-Max move for each style. The pokémon will also be allowed to be used in online and official competitions. 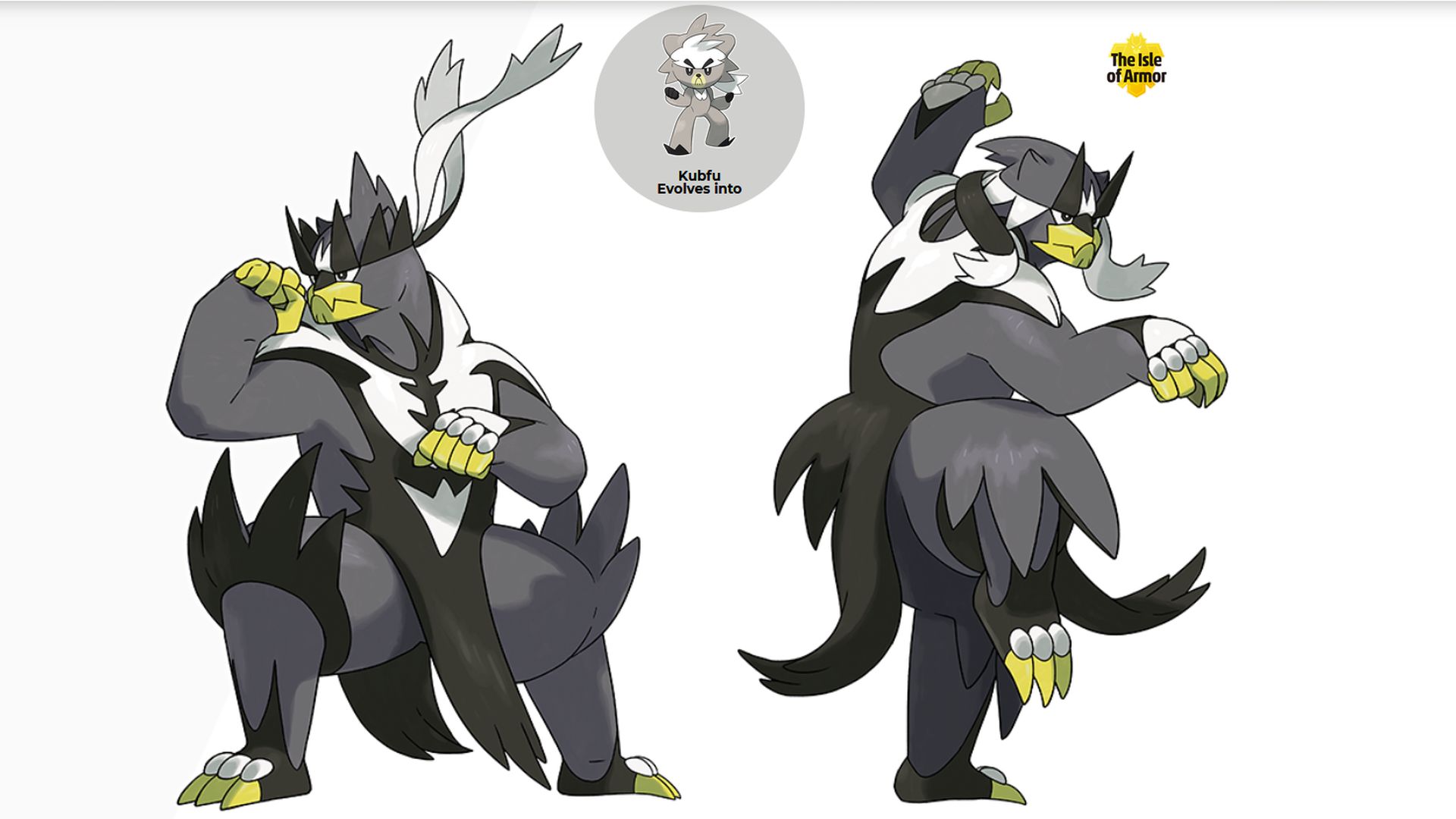 Finally, the Isle of Armour will introduce new pokémon dens, gigantamax forms and G-Max moves for the final evolutions of the Galar starters, more opportunities to turn Apricorns into Pokéballs, an Exp. Charm to help boost your team’s experience points, brand new outfits to wear and the ability to customise the look of your Rotom Bike.

Part two will introduce the snow swept area known as The Crown Tundra releasing Autumn 2020. Exploring the themes of… well, exploration. This large region of Galar is a host to various snowy mountains and tight knit communities that rely on each other to survive. There’ll be even more Pokémon dens, fashion items and Pokémon introduced that haven’t been seen in Galar. An unnamed accomplice will appoint you as the leader of an expedition to the Crown Tundra and scope out the massive snowfields, explore mysterious temples or uncover the secrets of Pokémon dens. Similar to the Isle of Armour, The Crown Tundra also hosts a brand new legendary pokémon, the psychic/grass-type Calyrex. Legends state this elegant pokémon once ruled over an area of Galar, including the Crown Tundra. Perhaps you’ll be able to uncover the mysterious history of Calyrex during your expedition.

The Crown Tundra introduces a brand new cooperative play mode. Before, you only got a glimpse of a pokémon den when taking part in Max Raid Battle… now you can explore them with some friends through a local or online connection. It is thought that, deep inside the dens, legendary pokémon from other regions can be seen dynamaxing there.

Presents of the Present

A few surprises were added with the latest Pokémon Sword and Shield software update, the one that launched shortly after the Pokémon Direct. Firstly, the spawn rate of gigantamax Coalossal, Lapras, Flapple, or Appletun have been greatly increased in Max Raid battles of the Wild Area.

DLC can be a fairly controversial topic, however the way that The Pokémon Company and Game Freak seem to be handling it is fairly admirable in my opinion. The Expansion Pass seems to be a relatively decent price considering how much content will be introduced, I’m especially interested in exploring the Crown Tundra and Pokémon dens with friend later this year. I honestly wouldn’t be mad if this is a new precedent for Pokémon games and replaces the need for an enhanced edition.

I’m also really glad that the old pokémon being added aren’t completely locked behind a paywall. It’s definitely a smart decision to allow users who have no interest in the DLC still obtain new and re-introduced pokémon through Link Trades and the Pokémon Home service.